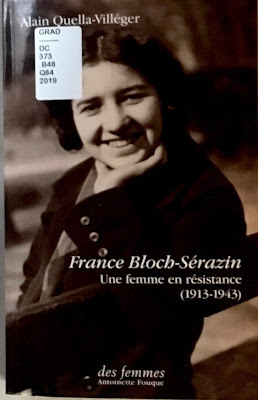 "Je n'ai pas peur de la mort; j'aime mon pays et je meurs pour sa libèration, comme l'ont fait mes amis. [I am not afraid of death; I love my country and I die for its liberation, as my friends have done.]" So said France Bloch-Sérazin just before she was put to death by the Nazis on  February 12, 1943. For two years before her capture, France Bloch-Sérazin had used her training as a chemist to prepare materials for the Resistance against the Nazis in Paris. In makeshift laboratories she prepared explosives and weapons to be used to oppose the occupation. The constant risks she took were shared with her husband Fredo Sérazin. During this time, she gave birth to her son and cared for him while engaging in resistance activities. She continued despite her husband's arrest and imprisonment. She died a few weeks before her thirtieth birthday.

These early resistants were members of the French Communist Party, as well as being ardent patriots and anti-Nazis, according to Alain Quella-Villéger, author of the book France Bloch-Sérazin: Une femme en résistance (1913-1943), which was just published last May. Although I had heard about France Bloch-Sérazin before, I was fascinated by the detailed descriptions of how she worked in the resistance, communicated with fellow resistants by arranged meetings in cafes, in the Metro, and in other Paris locations; delivered documents and weapons and led a life that was unimaginably risky.

France Bloch-Sérazin was a Communist by conviction and by family ties: her father, Jean-Richard Bloch (1884-1947) was a famous author as well as a Party member, and several other family members were also highly political and involved in the resistance. In particular, her brother Michel Bloch (1911-2000) and his wife Colette Bloch (1919-2016) carried documents between the occupied and unoccupied French territories, until Michel was arrested and imprisoned for the remainder of the war. In 1989, we met Michel and Collette, who lived in the family home in Poitiers, France. This home also played a large role in Quella-Villéger's narrative of France Bloch-Sérazin's short life. We were moved by their description of their activities and their sister's role in the war, and impressed by the courage that all had possessed. This connection, and our continuing friendship with Laurent Bloch, son of Michel and Collette, led me to read this new book.

France Bloch-Sérazin's death sentence was carried out in secrecy under the Nazi program of punishment of opponents: Nacht und Nebel or Nuit et Brouillard or Night and Fog. Her family knew only of her arrest, and didn't know her fate, or even if she had somehow survived, until they had spent agonizing time searching after the end of the war. They also were searching for information about other family members who had died, particularly Jean-Richard Bloch's mother, who had been deported and gassed at Auschwitz along with hundreds of thousands of fellow Jews from France.

Quella-Villéger especially illuminates the horror of the aftermath of the war in France. As I read, I remembered other accounts of the desperate search for information about those who had disappeared, the emotional climate of a country that had been physically destroyed, the horrendous political divisions by which many French people had collaborated with the Nazi occupation, and for many surviving French people dealing with experience of the deportation of many neighbors and friends.

The memory of France Bloch-Sérazin and other women of courage and conviction who worked to oppose the Nazis in France was little recognized after the war, for a number of political reasons, which the author touches on briefly. He views this as a tragic story, as an incompletely recognized story, and above all as a story of great courage and determination.